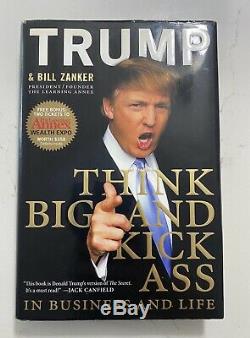 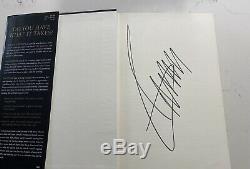 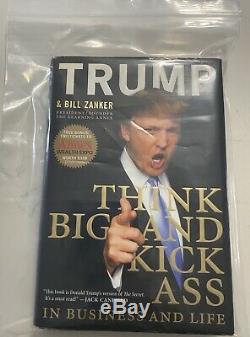 Donald Trump Autographed copy of 2007 hardcover Think Big and Kick Ass. Book is in very good condition as shown in photos. Description of the book is below. Trump is an icon: the very definition of the American success story. President-elect, reality-television star, and developer of some of the planet's most prestigious real estate, he's also become one of the world's wealthiest men.

Trump is a living example of how thinking BIG and knowing when to back up your opinions aggressivelyregardless of what your critics or opponents might saycan help you maximize your personal and professional achievements. In his first political campaign, Trump defeated his opponents by rallying voters nationwide to Make America Great Again. For the first time ever, you too can learn Trumps secrets to thinking BIG and kicking ass! How to get it and how to get it back. Revenge: how and when to get it (and why it's so sweet).

I love you, now sign this! Why contracts in business and personal life are so important. Real-life stories from people who've applied the think BIG formula in their own lives. These strategies are proven and attested to by those who've learned to think BIG from Donald Trump and found success in their own lives even when the world seems to be against them. Co-authored with Bill Zanker, an entrepreneur who learned these tactics firsthand from Trump, Think BIG and Kick Ass shows you how to bring a winning attitude to everything you do.

The star of The Apprentice and developer of some of the planet's most prestigious real estate, he's been on the bottom and risen to become one of the world's wealthiest men. For the first time ever, you too can learn Trump's secrets to thinking BIG and kicking ass! Why contracts in business and personal life are so important. Trump is a graduate of the Wharton School of Finance and the developer of some of the most prestigious addresses worldwide, including Trump Tower on Fifth Avenue, Trump Park Avenue, Trump World Tower, 40 Wall Street, The Grand Hyatt Hotel, the historic Mar-a-Lago Club in Palm Beach, the Palm Trump International Hotel and Tower in Dubai, and numerous award-winning golf courses. His Real Estate and Wealth Expos with The Learning Annex have helped over one million people to think BIG.

As the Emmy-nominated star and coproducer of the hit television show The Apprentice and the author of seven bestsellers, he is truly a media giant. This is the first book where Donald reveals his Think BIG attitude. The Learning Annex has now spent two consecutive years on the Inc.

The growth of his small business stems from Zanker's partnership with and learning from Donald J. Trump's think BIG strategies. Zanker has been featured in Success, Forbes, Fortune, Inc. He lives in New York City and Park City, Utah. The item "President Donald Trump Autographed Book Think Big & Kick Ass In Business & Life" is in sale since Monday, July 6, 2020.