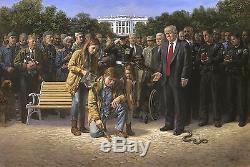 You Are Not Forgotten by Jon McNaughton. This unframed open edition canvas giclée print is brand new, signed by the artist Jon McNaughton, stretched on wooden stretcher bars, and ships flat and fully insured in a sturdy box. You Are Not Forgotten color_lens. I have been working on this painting for over four months. It was important to me to show though the art what my hope is for our President that he can help build back our country and remember those who were once forgotten by those in Washington, I'm praying for you, President Trump!

When I decided to paint this picture, I wondered if this was taking it too far. But, sometimes you have to speak forcefully, like the brushstrokes of my painting. Many Americans have felt forgotten by the establishment in Washington. Im talking about the people who are more interested in themselves, and their political careers.

How many veterans have been neglected? How many of our police officers have been marginalized? How many families are suffering because of poor healthcare, limited opportunities, and government intrusion? Last year we elected President Trump. He expressed by his words and demeanor what Americans wanted a man who was not going to bow down to Washington or other countries. A man that would not forget the'forgotten men and women' of this country who elected him. I want a president that will crush the enemies of liberty, justice, and American prosperity. They may have the power to bruise his heal, but he will have the power to crush their head! Jon McNaughton is an established artist from Utah whose paintings are attracting the attention of collectors from across the country.

Artist memories of open gates leading into lush garden paths, quiet streets, charming homes, and poetic landscapes are the focus of his paintings. I have often found on returning to nostalgic places of my past that they were not as lovely as I remembered in my mind's eye. For this reason, I choose to paint from my heart rather than working from photographs.

Usually a small pencil sketch is enough to spark a painting. I suppose I choose to look at the world through my rose-colored glasses. McNaughton's roots trace back to the small town of Grafton, Utah. He feels a deep love for the land of his pioneer heritage.

McNaughton's artistic style stems from his study of the forerunners to the Impressionists. The works of these artists deeply moved him. Softly painted landscapes depicting genre scenes around the French countryside with subtle tones of color and light were a springboard for McNaughton's creative inspiration. These Barbizon painters were a great influence to many of the early Impressionists. Artists such as Monet, Pissaro, Van Gogh, Renoir, and others made frequent reference to them. Because the Barbizon artists painted during the 19th century, few artists today follow in their footsteps. Jon McNaughton has specific goals for what he hopes to accomplish in the future. It is my hope that my paintings will reach the viewer on more than a superficial level to touch something inside them which may not easily be reached. I hope the paintings will speak to them and say something like,'you've seen me before, yet you have never seen anything completely like me. When they walk away, I want to leave a feeling with them they will never forget because what they have seen has become a part of them.

We gladly welcome international buyers. We aim to show the highest quality photos with up-close details since pictures speak a thousand words. We are authorized dealers of fine artwork painted by some of the world's most gifted and talented artists. We aim to offer the best variety of artwork on the World Wide Web.

We're always adding new artists. The item "Jon McNaughton YOU ARE NOT FORGOTTEN 12x18 Signed Donald Trump Canvas Giclee Art" is in sale since Monday, August 21, 2017. This item is in the category "Art\Art Prints". The seller is "artcatalog" and is located in Raleigh, North Carolina.