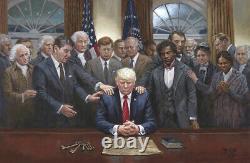 Legacy of Hope by Jon McNaughton. Is your one-stop fine art gallery for getting the lowest sale prices on authentic open and limited edition art prints and canvases by your favorite artists such as. This unframed limited edition canvas giclée print is brand new, signed and numbered by the artist Jon McNaughton, and ships rolled and fully insured in a sturdy tube. It comes with a Certificate of Authenticity (COA) from McNaughton Fine Art. I have been discouraged by the times in which we live a battered economy, a confusing pandemic, civil unrest, riots, and the blind rage of those who seek to destroy our country.

What's even more troubling, is that many in the mainstream media have seemingly joined forces with those who are actively (and seditiously) trying to burn America to the ground. While thinking about these things, the White House released a photograph a photograph that gave me... The photograph shows a group of black religious and political leaders surrounding President Trump and praying for him praying for the nation. To say that this image inspired me would be an understatement. Here stood a group of men and women Americans praying for God to help President Trump! It was a photograph of faith and hope for the future. And as I thought about that hope, I couldn't help but think about our HISTORY our. Contrary to what some might tell you, the United States didn't begin in 1619, with the first importation of slaves. The United States has a specific birthdate it began in 1776.

It began when we not only declared our independence from a system that introduced slavery to the New World, but our country also began when we declared that all men and women are created equal. From that day forward, great men and women people like George Washington, Harriet Tubman, Abraham Lincoln, Thomas Jefferson, and Frederick Douglass have risen up and have fought and died to ensure that this nation lives up to its founding creed. As Americans, we share a.

That should never be forgotten. Credits: The original images that inspired this painting were released by the White House and are licensed under a Creative Commons License (CC BY 3.0 US). Additionally, I want to thank those who stood in the image those brave men and women who stood with our duly-elected President, and continue to stand for our country. Pictured (left to right): Andrew Brietbart, James Madison, an American artist, Thomas Jefferson, Ronald Reagan, George Washington, JFK, Calvin Coolidge, Dwight D.

Eisenhower, representing black clergy, Frederick Douglass, Abraham Lincoln, Robert E. Lee, Clara Barton, representing white clergy, Harriet Tubman, and John Adams. Is an established artist from Utah whose paintings are attracting the attention of collectors from across the country. Artist memories of open gates leading into lush garden paths, quiet streets, charming homes, and poetic landscapes are the focus of his paintings. I have often found on returning to nostalgic places of my past that they were not as lovely as I remembered in my mind's eye.

For this reason, I choose to paint from my heart rather than working from photographs. Usually a small pencil sketch is enough to spark a painting.

I suppose I choose to look at the world through my rose-colored glasses. McNaughton's roots trace back to the small town of Grafton, Utah. He feels a deep love for the land of his pioneer heritage. He says it was instrumental in developing his artistic tendencies. From an early age, Jon McNaughton showed great promise that eventually led to a full art scholarship to Brigham Young University. Only two out of two thousand received the award. While a student, McNaughton received both the Art Talent Award and the Design Talent Award from the university. Jon McNaughton describes his work as the essence of nature. Refusing to work from photographs, mental notations and an occasional pencil sketch are enough to inspire a beautiful painting. I believe that only the basic elements of a beautiful painting exist in nature. The sentiment and feeling that flow from the mind and heart of an artist are what create the highest beauty of landscape painting. McNaughton's artistic style stems from his study of the forerunners to the Impressionists. The works of these artists deeply moved him. Softly painted landscapes depicting genre scenes around the French countryside with subtle tones of color and light were a springboard for McNaughton's creative inspiration. These Barbizon painters were a great influence to many of the early Impressionists. Artists such as Monet, Pissaro, Van Gogh, Renoir, and others made frequent reference to them.

I hope the paintings will speak to them and say something like,'you've seen me before, yet you have never seen anything completely like me. When they walk away, I want to leave a feeling with them they will never forget because what they have seen has become a part of them. And will be carefully and expertly packed in a. However, first, please wait for us to send you an. We gladly welcome international buyers.

However, you will need to use. Listings to make sure that you are getting what you think you are. We aim to show the highest quality photos with up-close details since pictures speak a thousand words. We are authorized dealers of fine artwork painted by some of the world's most gifted and talented artists.

We aim to offer the best variety of artwork on the World Wide Web. We're always adding new artists. I will never knowingly try to mislead you in any way.

I do my best to describe everything I sell, but I'm not perfect. People do have differences of opinion. I really do take pride in my feedback, and strive for excellence with my feedback score. As I continue to list 100's of new items each month. The item "Jon McNaughton LEGACY OF HOPE 24x36 S/N Canvas Donald Trump Receiving Prayer" is in sale since Thursday, July 23, 2020. This item is in the category "Art\Art Prints".