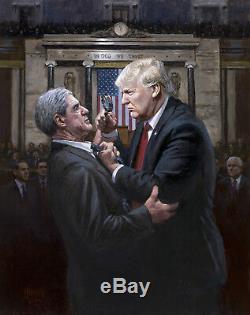 Expose the Truth by Jon McNaughton. This unframed limited edition canvas giclée print is brand new, signed and numbered by the artist Jon McNaughton, and ships rolled and fully insured in a sturdy tube. It comes with a Certificate of Authenticity (COA) from McNaughton Fine Art. There has been a crusade in this country led by a group that wishes to overturn the election and impeach President Trump. Robert Mueller leads a special council of at least 17 partisan Democrat attorneys who have yet to find a single piece of evidence against the President, yet they ignore the mounting verifiable evidence against Russian collusion with the DNC and the Clinton Foundation. The political bias and negligence of those who have lead the Department of Justice and the FBI is forthcoming.

There comes a time when you have to take a stand to. Jon McNaughton is an established artist from Utah whose paintings are attracting the attention of collectors from across the country.

Artist memories of open gates leading into lush garden paths, quiet streets, charming homes, and poetic landscapes are the focus of his paintings. I have often found on returning to nostalgic places of my past that they were not as lovely as I remembered in my mind's eye. For this reason, I choose to paint from my heart rather than working from photographs. Usually a small pencil sketch is enough to spark a painting.

Jon McNaughton describes his work as the essence of nature. Refusing to work from photographs, mental notations and an occasional pencil sketch are enough to inspire a beautiful painting.

I hope the paintings will speak to them and say something like,'you've seen me before, yet you have never seen anything completely like me. When they walk away, I want to leave a feeling with them they will never forget because what they have seen has become a part of them. We gladly welcome international buyers. We aim to show the highest quality photos with up-close details since pictures speak a thousand words. We are authorized dealers of fine artwork painted by some of the world's most gifted and talented artists.