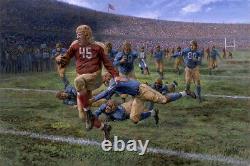 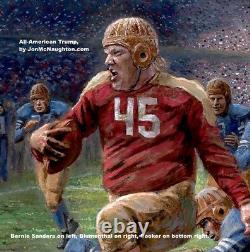 All-American Trump by Jon McNaughton. This unframed limited edition canvas giclée print is brand new, signed and numbered by the artist Jon McNaughton, and ships rolled and fully insured in a sturdy art tube. It comes with a Certificate of Authenticity (COA) from McNaughton Fine Art. When they played football in the old days they didnt have facemasks. It was a time of blood, guts, and glory. You have to push hard for everything you get. The field is muddy, and the players can get dirty. But, we have a President that has risen above the rest. The other side hates him and will do anything to destroy him. Try to take him down think again! Hes going for the goal, another touchdown, SCORE! Goal line: President Trump, Closest to Trump: Cory Booker, Three on the ground: Bill de Blasio, Joe Biden, Barack Obama, Next row of four: Bernie Sanders, Richard Blumenthal, Chuck Schumer, and Dick Durbin, Referee and three blue players in the back: Not telling! Jon McNaughton is an established artist from Utah whose paintings are attracting the attention of collectors from across the country. Artist memories of open gates leading into lush garden paths, quiet streets, charming homes, and poetic landscapes are the focus of his paintings. I have often found on returning to nostalgic places of my past that they were not as lovely as I remembered in my mind's eye. For this reason, I choose to paint from my heart rather than working from photographs. Usually a small pencil sketch is enough to spark a painting.

He says it was instrumental in developing his artistic tendencies. From an early age, Jon McNaughton showed great promise that eventually led to a full art scholarship to Brigham Young University. Only two out of two thousand received the award.

While a student, McNaughton received both the Art Talent Award and the Design Talent Award from the university. Jon McNaughton describes his work as the essence of nature.

The sentiment and feeling that flow from the mind and heart of an artist are what create the highest beauty of landscape painting. McNaughton's artistic style stems from his study of the forerunners to the Impressionists.

The works of these artists deeply moved him. Softly painted landscapes depicting genre scenes around the French countryside with subtle tones of color and light were a springboard for McNaughton's creative inspiration. These Barbizon painters were a great influence to many of the early Impressionists.

Artists such as Monet, Pissaro, Van Gogh, Renoir, and others made frequent reference to them. Because the Barbizon artists painted during the 19th century, few artists today follow in their footsteps. Jon McNaughton has specific goals for what he hopes to accomplish in the future. It is my hope that my paintings will reach the viewer on more than a superficial level to touch something inside them which may not easily be reached.

I hope the paintings will speak to them and say something like,'you've seen me before, yet you have never seen anything completely like me. When they walk away, I want to leave a feeling with them they will never forget because what they have seen has become a part of them.

I will never knowingly try to mislead you in any way. I do my best to describe everything I sell, but I'm not perfect. People do have differences of opinion. I really do take pride in my feedback, and strive for excellence with my feedback score.