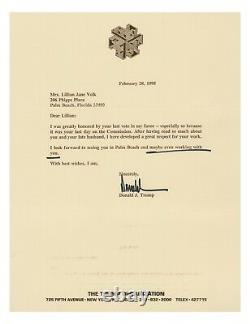 Important typed letter signed by, "Donald, " Trump thanking Commissioner Lillian Jane Volk for approving his development plans at Mar-a-Lago: I was greatly honored by your last vote in my favor-especially so because it was your last day on the Commission. After having read so much about you and your late husband, I have developed a great respect for your work. I look forward to seeing you in Palm Beach and maybe even working with you.

IMPORTANT TYPED LETTER SIGNED BY DONALD TRUMP ON THE EARLY DEVELOPMENT OF MAR-A-LAGO IN 1995. After purchasing the estate in 1985, Trump regularly had to apply for approval with the Palm Beach Landmarks Preservation Commission for any building proposals on Mar-a-Lago. It was declared a National Historic Landmark in 1980 due to the mansion built on the estate by the heiress Marjorie Merriweather Post in 1927.

Trump was denied constantly by the Commission, but this was one of the few exceptions he was granted approval. THE VERY SAME YEAR, TRUMP TURNED MAR-A-LAGO INTO A PRIVATE CLUB. The letter is one page on The Trump Organization letterhead, measures 11 by 8.5 inches, created in New York City on February 28, 1995, in very fine condition with only light offsetting of the letter in the lower blank area, and accompanied by the original mailing envelope.

This item is in the category "Collectibles\Autographs\Political\Presidential". The seller is "grayautographs" and is located in this country: US.