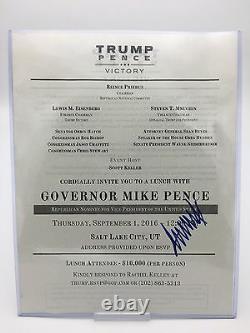 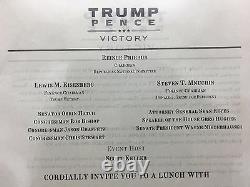 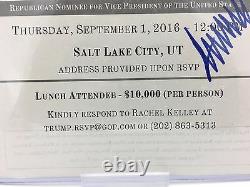 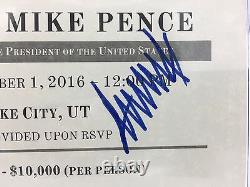 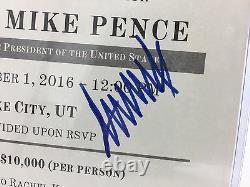 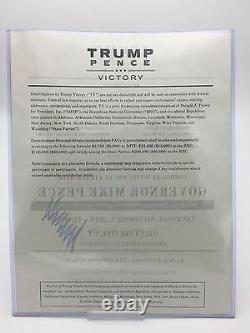 Hand Signed by President DONALD TRUMP. GUARANTEED TO BE 100% AUTHENTIC.

TWICE REMOVED FROM THE INDIVIDUAL WHO PERSONALLY HAD THIS SIGNED BY PRESIDENT TRUMP. PLASTIC TOP LOADER CASE IS INCLUDED. Hand Signed DONALD TRUMP fundraiser autograph. President Trump signed a number of these for his guests at his fundraiser at Oak Hills Country Club in San Antonio in June 2016. The form was in an oration to the following fundraiser in Salt Lake City. A valued memento now that Trump is our new president!

He signed a number of these for his guests at his fundraiser at Oak Hills Country Club in San Antonio in June 2016. Trump is the 45th President of the United States.

He believes the United States has incredible potential and will go on to exceed anything that it has achieved in the past. His campaign slogan was Make America Great Again, and that is exactly what he intends to do. Trump is the very definition of the American success story. Throughout his life he has continually set the standards of business and entrepreneurial excellence, especially with his interests in real estate, sports, and entertainment. Likewise, his entry into politics and public service resulted in the Presidential victory in, miraculously, his first ever run for office.

After graduating from the Wharton School of Finance, Mr. Trump followed in his fathers footsteps as a real estate developer, and he entered the world of real estate development in New York. The Trump signature soon became synonymous with the most prestigious of addresses in Manhattan and subsequently throughout the world. Trump has authored over fourteen bestsellers and his first book, The Art of the Deal, in addition to being the #1 book of the year, is considered a business classic. Trump announced his candidacy on June 16, 2015, and after seventeen Republican contenders suspended their campaigns, he accepted the Republican nomination for President of the United States in July of 2016.

Trump won the election on November 8 of 2016 in the largest electoral college landslide for a Republican in 28 years. He won over 2,600 counties nationwide, the most since President Reagan in 1984. Additionally, he won over 62 million votes in the popular vote, the highest all-time for a Republican nominee. He also won 306 electoral votes, the most for a Republican since George H. Millions of Americans rallied behind his message of rebuilding our country and disrupting the status quothis was a truly national victory and a historic movement.

Trump campaigned in places he knew Republicans have had difficulty winningFlint, Michigan, charter schools in inner-city Cleveland, and Hispanic churches in Floridabecause he wanted to bring his message of economic empowerment to all Americans. Millions of new Republicans trusted Mr.

Trump with their vote because of his focus on delivering prosperity through better trade deals, and as a result there were healthy margins of victory in newly red areas. It is clear that President Trumps win is one that brought Americans of all backgrounds together, and he is ready to deliver results for the nation on day one and every day of his tenure. President Trump has been married to his wife, Melania, for twelve years and they are parents to their son, Barron. Trump has four adult children, Don Jr.

Ivanka, Eric and Tiffany, and eight grandchildren. The information available in the description regarding the location and means by which the item was initially obtained was provided by the intermediary vendor.

Sources most of our high-end goods through authorized factory-direct wholesalers of multiple brands. You will NEVER have to worry about whether your sunglasses, or any other item we sell, is authentic or not. Also, if we do not have the best price on the internet, let us know and we will try to BEAT it! The item "DONALD TRUMP 9/1/2016 Trump Pence Victory Invitation AUTOGRAPH with Provenanance" is in sale since Saturday, March 18, 2017.

This item is in the category "Collectibles\Autographs\Political\Presidential". The seller is "pro-2a-solution" and is located in Lafayette, Louisiana.