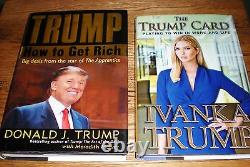 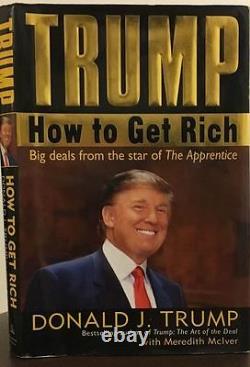 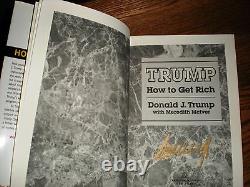 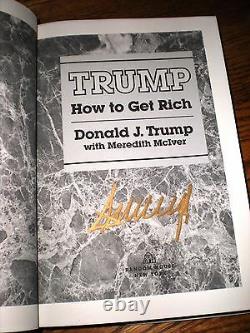 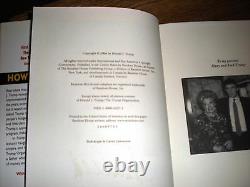 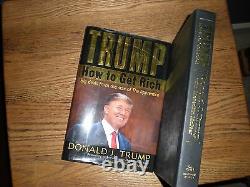 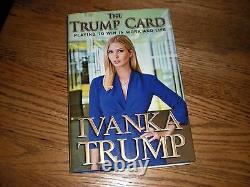 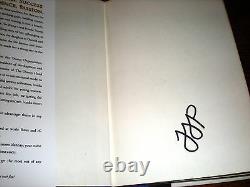 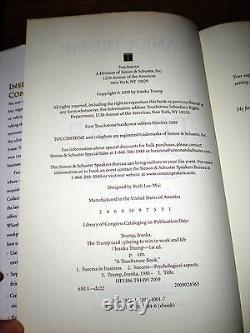 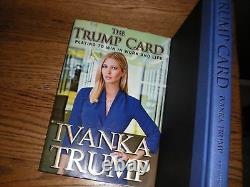 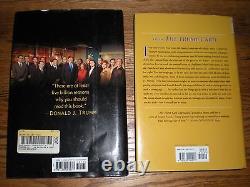 For your consideration is a UNIQUE Set of 2--Father and Daughter Hardcover Bestsellers in Excellent Condition! FIRST is this beautifully AUTOGRAPHED in gold pen by Donald Trump: HOW TO GET RICH, BIG DEALS FROM the President of the United States, published by Random House, 2004. Both cover and dust jacket are in Near Fine condition.

Born June 14, 1946 (age 74) in Queens, New York, President DONALD JOHN TRUMP, was best known as a billionaire real estate mogul, builder, philanthropist and television personality. HOW TO GET RICH Real estate titan, bestselling author, TV impresario and most importantly President of the United States--Donald J. Trump reveals the secrets of his success in this candid and unprecedented book of business wisdom and advice.

Over the years, everyone has urged him to write on this subject, but it was not until NBC and executive producer Mark Burnett asked him to star in The Apprentice that he realized just how hungry people are to learn how great personal wealth is created and first-class businesses are run. Thousands applied to be Trump's apprentice, and millions have been watching the program, making it the highest rated debut of the season. With his characteristic brass and smarts, Trump offers insights on how to invest wisely, impress the boss and get a raise, manage a business, efficiently hire, motivate, and fire employees, negotiate anything, maintain the quality of your brand, think big and live large. Trump is one of a kind.

Every day, he lives the American dream. Is this AUTOGRAPHED Ivanka Trump First Edition of The Trump Card: Playing to Win in Work and Life, published by Touchstone Books (Simon & Schuster), NY, 2009. Daughter-entrepreneur of Presidential Candidate Donald Trump writes a step-by-step guide to making decisions and setting priorities in daily life, as well as on the job.

She is Executive Vice President of Development & Acquisitions at the Trump Organization and has been married to real estate developer Jared Kushner since 2009 (photo #6). Ivanka and her husband have three children: Arabella Rose Kushner, Joseph Frederick Kushner, Theodore James Kushner and attend Jewish Temple Kehilath Jeshurun in NY City.

In The Trump Card, Ivanka Trump shares the life lessons and hard-won insights that have made her a rising star in the business world. Whether its landing that first job, navigating the workplace, or making a lasting impact, Ivankas valuable, practical advice for young women shows how to. Use uncertainty to your advantagethrive in any environment. Step up and get noticed at workfocus and efficiency will open doors.

Create a strong and consistent identityyour name and reputation are your best assets. Know what you wantget the most out of any negotiation. Ivanka also taps into the wisdom of todays leaders, including Arianna Huffington, Russell Simmons, and Cathie Black, with "Bulletins" from her BlackBerry.

"Weve all been dealt a winning hand, " she writes, and it is up to each of us to play it right and smart. This is truly an AUTOGRAPH collector's or HISTORIAN'S must-have SET at a great price! The item "2 SIGNED HC-President Donald and Ivanka Trump How to Get Rich + The Trump Card" is in sale since Wednesday, April 29, 2020. This item is in the category "Collectibles\Autographs\Political\Presidential". The seller is "weaverejus" and is located in Oceanside, California.